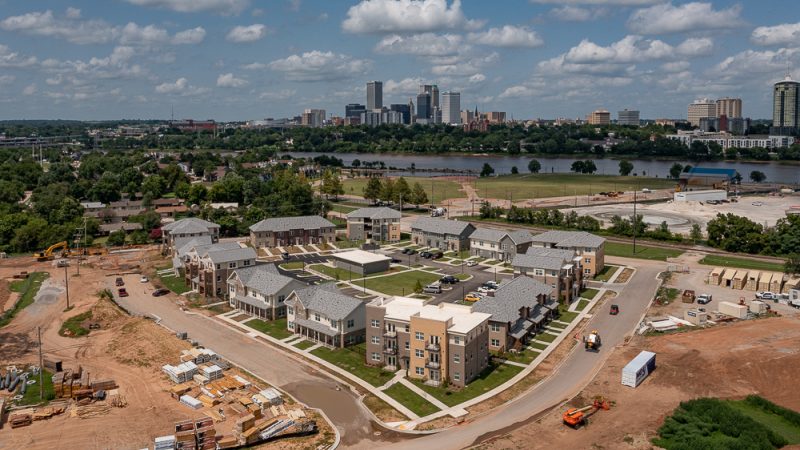 “It’s been incredible to witness what once was the Eugene Field neighborhood transform into River West. This project speaks to the power of mixed-income communities and their ability to drive transformative change for an entire neighborhood,” said Aaron Darden, THA president & CEO. “Financing for Phase IV represents a true commitment from a variety of partners to create a better Tulsa by transforming lives and communities.”

“We are pleased to partner with the City of Tulsa and the Tulsa Housing Authority on this exciting and ambitious project,” said Luci Blackburn, HUD’s Choice Neighborhoods director.  “The Choice Neighborhoods program significantly invests in affordable housing, resident opportunity, and neighborhood improvements with a goal of creating equitable communities where all residents can prosper.  We are thrilled to see the River West project move towards completion with HUD’s support.”

“As THA continues to grow, we are excited to close the fifth housing finance project together, which builds new affordable housing in Tulsa” said John Galfione, director at RBC Community Investments.  The sentiments were shared by Sandra DeFelice, senior managing director at M&T Reality Capital Corporation stating, “It was our pleasure to work with two high-capacity organizations in THA and The Michaels’ Organization to close on Phase IV and move swiftly to financing Phases V and VI to wrap the River West revitalization.”

“The redevelopment of the Eugene Field Neighborhood, years in the making, is one of the most significant redevelopment efforts that the City of Tulsa and the Housing Authority of the City of Tulsa has undertaken,” said Michaels Regional vice President Greg Olson. “Michaels is proud to have played a role in these efforts and look forward to building out the remainder of the neighborhood.”

The Housing Authority of the City of Tulsa (THA) and the City of Tulsa were awarded a $30 million CNI grant in 2017 by the United States Department of Housing and Urban Development (HUD) to launch the transformation of the Eugene Field neighborhood into River West, a mixed-income community. THA selected The Michaels’ Organization as its co-developer. The Choice Tulsa Transformation Plan includes the construction of up to 430 mixed-income apartments, a renovated West Tulsa Park, and extensive public infrastructure and stormwater improvements. Project totals are estimated at more than $180 million, representing Tulsa’s largest investment in affordable housing to date.

About Housing Authority of the City of Tulsa

The Housing Authority of the City of Tulsa (THA) is creating a better Tulsa by transforming lives and communities. THA has been serving the community since 1967, providing affordable housing solutions for Tulsa’s most vulnerable populations. THA owns and manages 13 communities, offers four Section 8 Project-Based Rental Assistance communities and manages the Housing Choice Voucher program. THA serves more than 20,000 Tulsans, providing affordable housing options in tandem with connection to supportive services to help all Tulsans thrive.

About The Michaels Organization